She was alleged to have insured her long legs for $40million last week.

And Taylor Swift has now responded to the claims with a tongue-in-cheek Instagram post, joking that her pet cat Meredith has ruined her biggest money-spinner and is going to cost her a fortune.

Posting a picture of her bleeding pins, which had been scratched to shreds by her naughty kitty, she joked: ’GREAT WORK MEREDITH I WAS JUST TRYING TO LOVE YOU AND NOW YOU OWE ME 40 MILLION DOLLARS’ (sic). 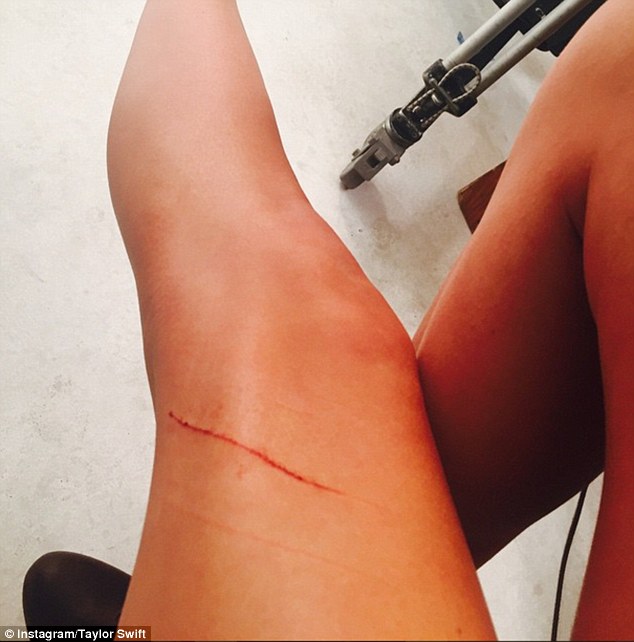 The 25-year-old star’s humorous response appears to quash the claims she took out an insurance plan because she didn’t want to be at risk of losing everything if she was unable to dance on stage.

A source told the National Enquirer: ’It seems like a ludicrous sum, but if something was to happen to her legs, Taylor wouldn’t be able to give her signature stage performances.Her $200 million career would be in big trouble.’

Taylor was believed to be ’embarrassed’ once she found out quite how much her legs were worth, with an insider adding: ’She thought her legs were possibly worth a million.’ 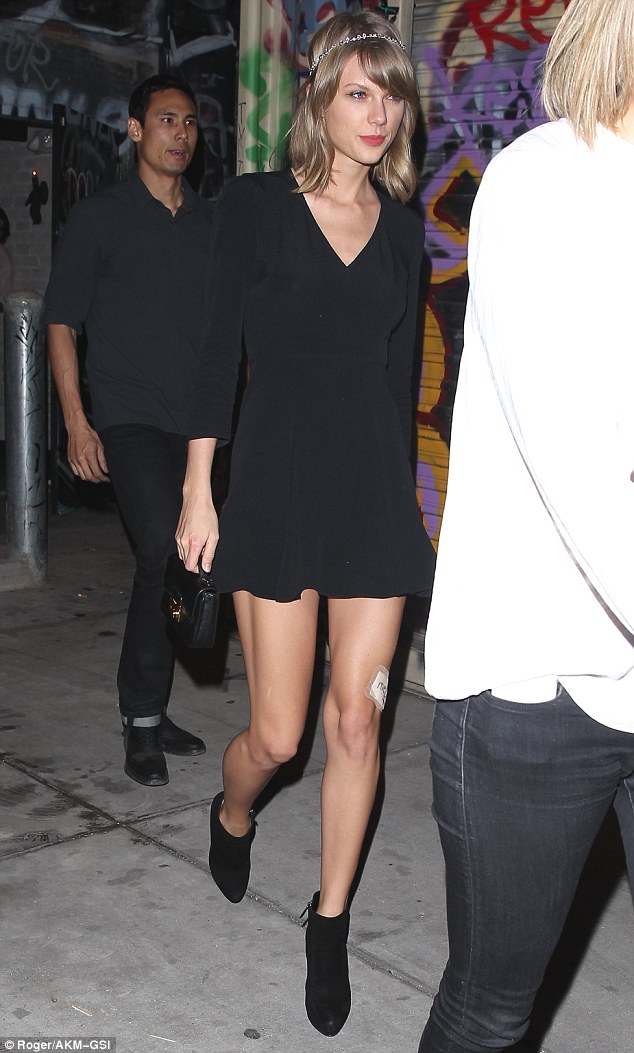 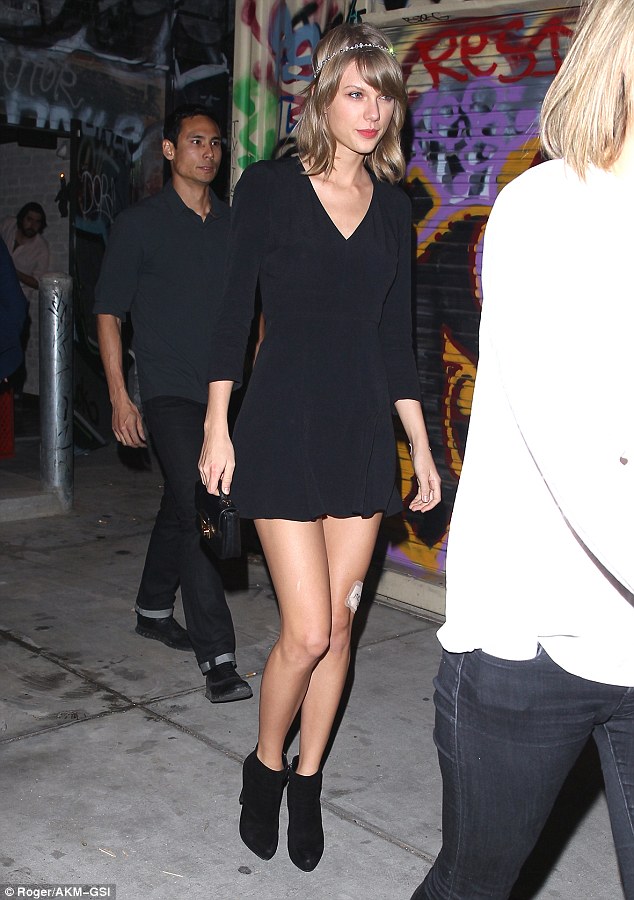 However, the pop star remained undaunted by the wound and enjoyed a night out in downtown Los Angeles with her younger brother Austin, who was accompanied by a mystery blonde.

She previously joked that Scottish Fold moggy Meredith has become a ’diva’ since blossoming into an internet sensation. 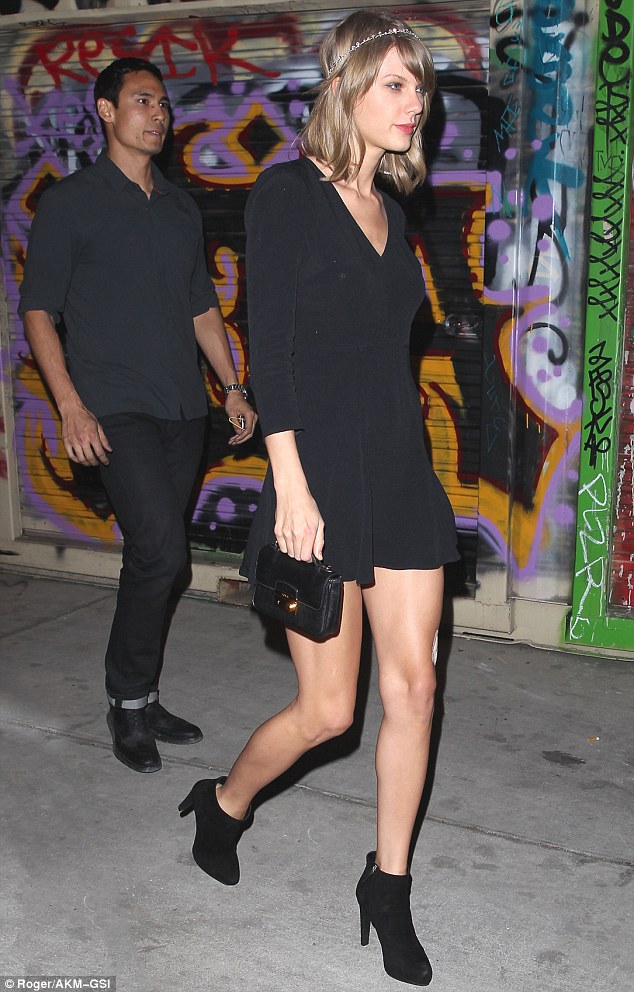 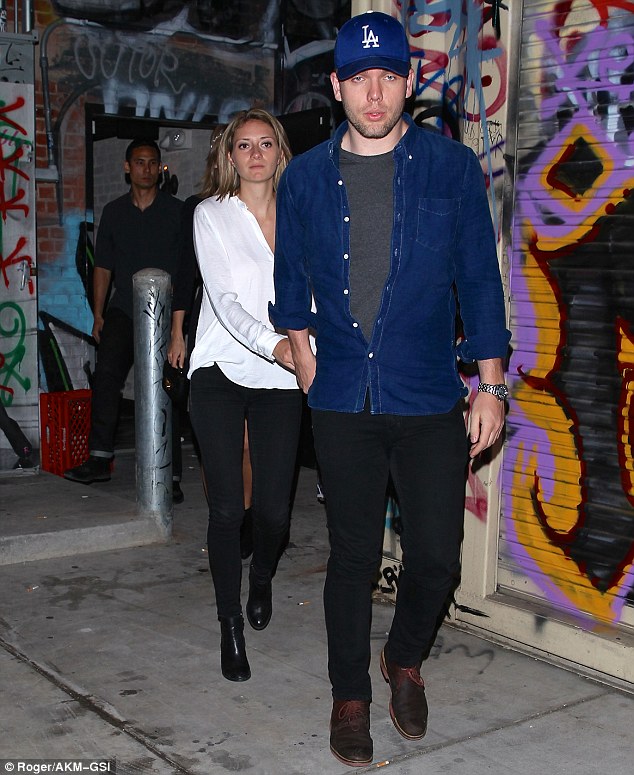 Taylor said during an appearance on The View: ’Meredith started out as a very friendly kitten and then she became some sort of an Internet celebrity and I think she kind of changed a little.

’She just kind of sits around and she’s always giving me the side glance. Like I don’t matter anymore to her because she knows that she was like 2013’s most popular celebrity cat.’

The singer also joked she worries potential boyfriends will be scared off because they might think she’s a ’crazy cat lady’. 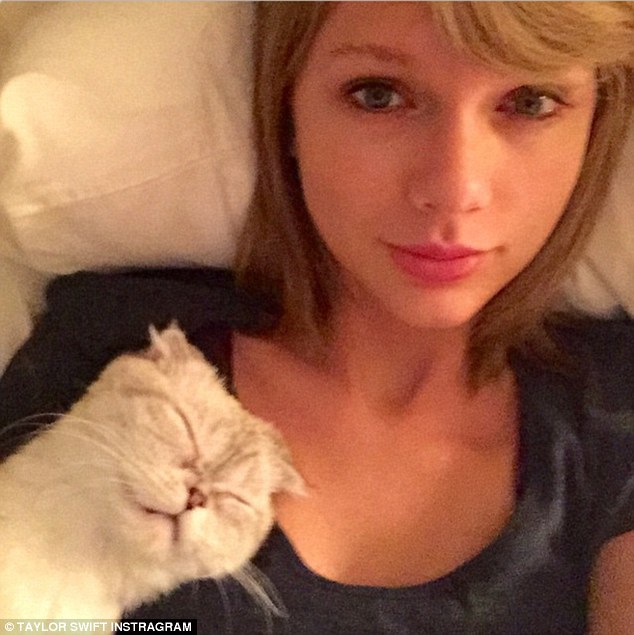 The Inspiration of Stylish Cardigans from Jessica Alba

And it’s no wonder why Jessica Alba’s eco-friendly home goods business is thriving, as she seems always on the go. 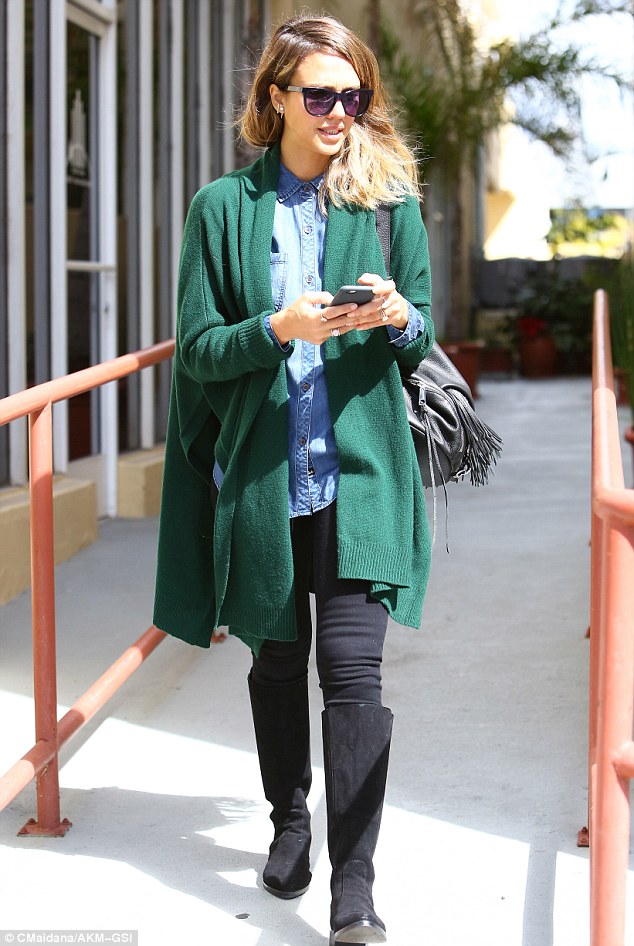 The mother-of-two seemed to be glued to her phone, perhaps checking important business messages, while stopping at an ATM and making a Starbucks run.

Jessica looked to have beat the wet weather too before it began raining and hailing.

The wife of Cash Warren was cosy in a long evergreen cardigan which she layered over a denim button-down blouse and black skinny jeans. 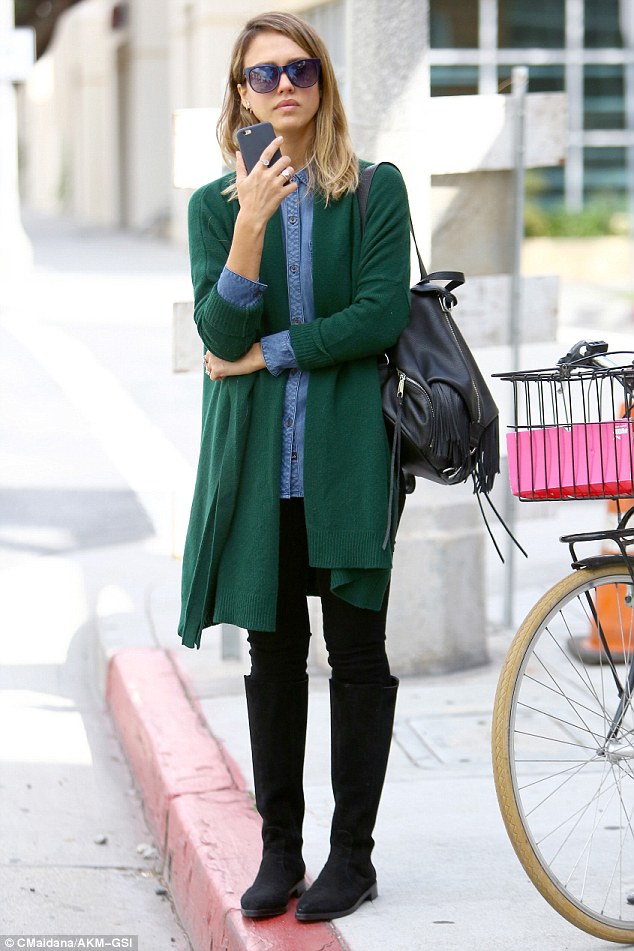 Completing her look, Jessica styled her sombre tresses down in natural waves, as her fresh face was concealed with purple-tinted sunglasses.

The Fantastic Four actress has had a prosperous year, as The Honest Company celebrated its third anniversary in January. 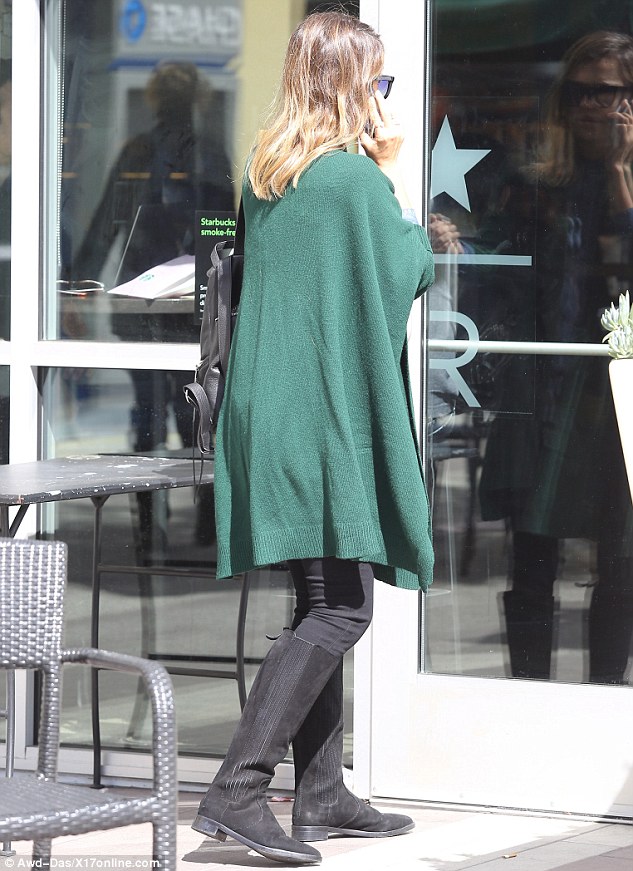 The Dark Angel star also has launched a cosmetics range after attracting a following of consumers who are fans of the brand.

’From day one when we opened our doors, we had so many people say ”when are you going to do makeup?”’ she shared. ’I’ve been developing and working on it for a couple of years now, and we’re going to be able to deliver on our promise to our customers.’

Jessica was seen on February 12 scouting a property in Los Angeles as a possible location for the first-ever The Honest Company store.

She has also been a contributing editor for Self Magazine. 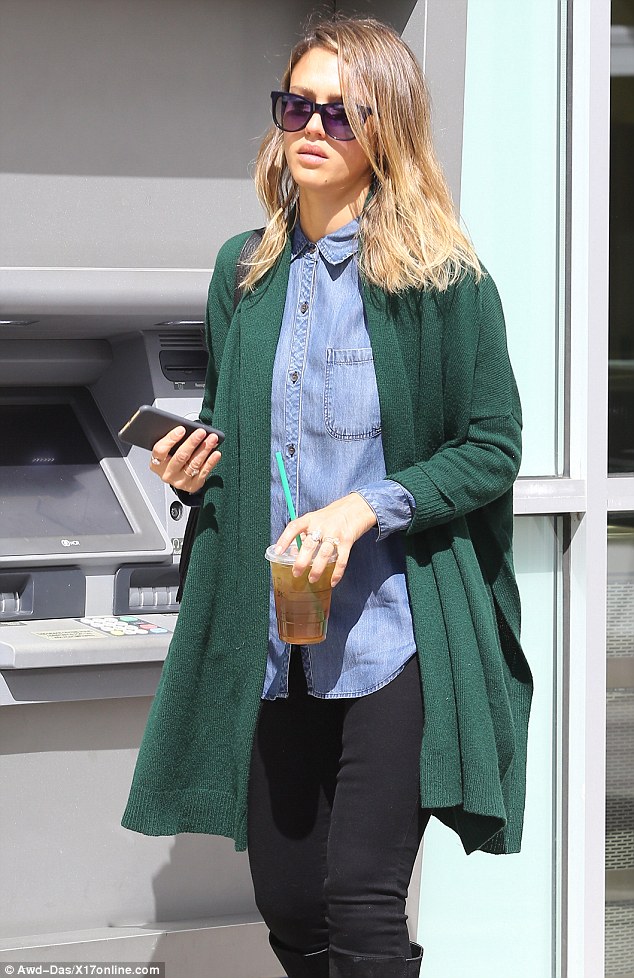 There are more stylish cardigans for women by Lalalilo.